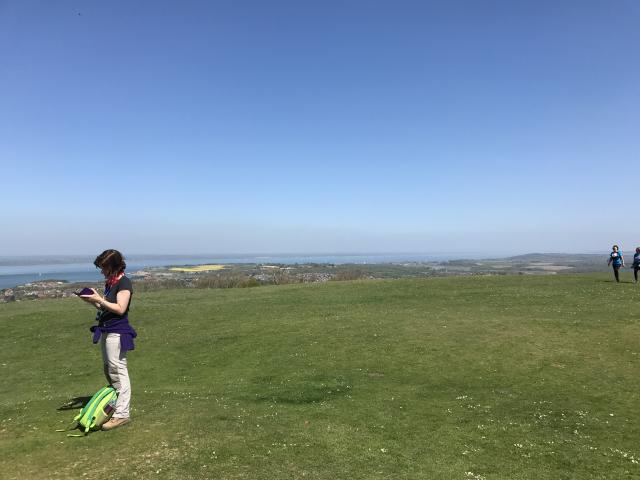 A crew of regular Bella sailors who have sailed around the island many times set out to walk from St Kats Point to Cowes via Tennyson Down as part of the annual Island Challenge. 8 people set off as part of the 1600 or so event competitiors and pleased to advise that all of the Bella 8 completed the walk in between just under 12 hours to 14 and a half hours. The intensity of the sun made it really hard graft and coupled with heavy mud in the Northern part of the Island it really was at the top end of the physical ability of the crew.

When joining Bella, who acted as our hotel for the event, the crew were greeed with the slogan 'Just Keep walking' scripbed in international nautical flags and this wisdom proved to be absolutely essential in being able to complete the challenge.

Following the walk there were many sore and aching limbs and plenty of blisters in fact the following day made it look as if the boat was holding a silly walk competition.

The view in the photgraph is from the monument at the top of Tennyson Down which is probably about a thrird of the way round the track and at 482 feet above sea level it has spectacular views of the Solent and the English Channel.